Today marks the 30th anniversary of the Cricket World Cup 1992, which was won for the first time for Pakistan under the leadership of incumbent Prime Minister and then cricket captain Imran Khan. On this memorable occasion, the Pakistan Cricket Board has placed this trophy for the spectators at Gaddafi Stadium in Lahore. In addition to watching the 1992 Cricket World Cup trophy, Pakistani cricket fans can also take pictures.

On the day of this memorable victory on March 25, 1992, the current chairman of the PCB, Rameez Raja, was also part of the winning squad. On this occasion, on the last day of the Test match against Australia, national cricketers, and other members also took pictures with the trophy and shared their impressions. The cricket board, which decided to celebrate the anniversary of the historic 1992 World Cup victory, announced on Friday that the trophy would be placed in the stadium, saying spectators could take pictures with it. 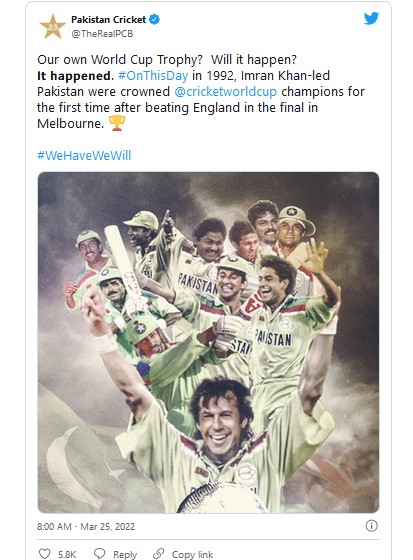