In the Lahore Test, Australia gave Pakistan a target of 351 runs for victory. By the end of the fourth day’s play, the national team had scored 73 runs without any loss. On the last day, another 278 runs would be required to win.

Australia gave Pakistan a target of 351 runs for victory

In the third and final Test match of the series being played at Gaddafi Stadium in Lahore, Australia declared their second innings at 227 for 3 on the fourth day. Australia’s opener Usman Khawaja scored an unbeaten century while David Warner was dismissed for a half-century. Shaheen Afridi, Naseem Shah, and Noman Ali took one wicket each for Pakistan. Pakistan started with a confident target of 351 runs and scored 73 runs without any loss till the end of the fourth day’s play. 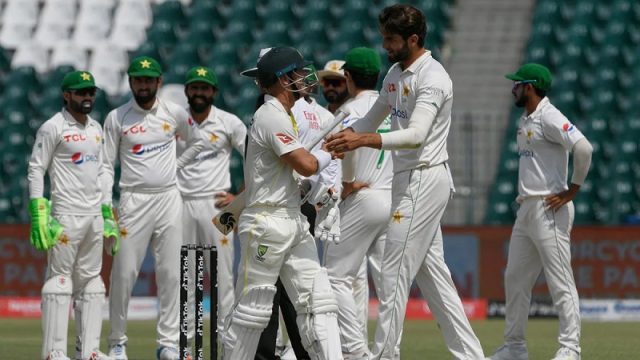 Pakistan openers Abdullah Shafiq (27) and Imam-ul-Haq (42) will resume their innings on the last day. On the last day of the game, Pakistan needs 278 more runs to win the match while Australia needs 10 wickets. It should be noted that two matches of the previous series between Pakistan and Australia were played in Lahore and Karachi which have been drawn.