In the second Test match between Pakistan and Australia in Karachi, Australia gave target got a target of 506 runs to win. After batting for half an hour in the first session on the fourth day of play, Australia declared their second innings at 97 for 2. David Warner scored 7 runs, Labushange was out for 44 runs.

Usman Khawaja remained unbeaten on 44 runs. Hassan Ali and Shaheen Afridi took one wicket each for Pakistan. Pakistan cricket team was all out for 148 runs in the first innings, but Australia decided to bat instead of following the national team.

By the end of the third day’s play, Australia had scored 81 runs for the loss of one wicket. The Australian team had declared the first innings at 556 for nine. Earlier, when Pakistan started batting in the first innings, Abdullah Shafiq was run out for 13 runs. 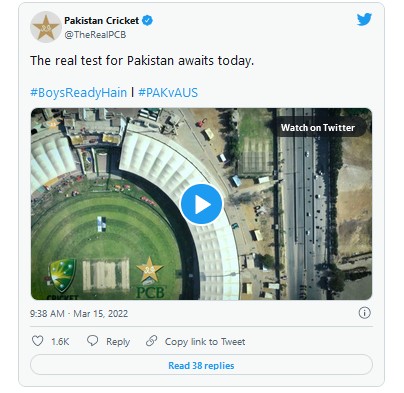 Imam-ul-Haq was dismissed by Cummins on the line ball for 20 runs. Azhar Ali scored 14 runs. His wicket was taken by Stark. Fawad Alam was LBW on Starc’s ball at zero. Mohammad Rizwan was dismissed for 6 by Cummins. Faheem Ashraf could score only 4 runs and LBW on the ball of Green.