Pakistani women footballer Hajira Khan was also present on the occasion to receive the FIFA trophy. Talking to the media, Hajira Khan said that the arrival of the FIFA World Cup trophy in Pakistan is welcome, and football conditions in Pakistan are not better but in spite of this, the arrival of the trophy is a big thing. The trophy will be flown from Lahore to other countries tonight. It is also worth mentioning here that this is the second time that the FIFA WorldCup trophy has turned to Pakistan. The FIFA trophy was also brought to Lahore in 2018. It should be noted that six months before the start of the FIFA World Cup, the World Cup trophy’s world tour started from the FIFA headquarters in Dubai, where the winners of the football World Cup, Casilla and Kaka presented the original FIFA Trophy Tour. 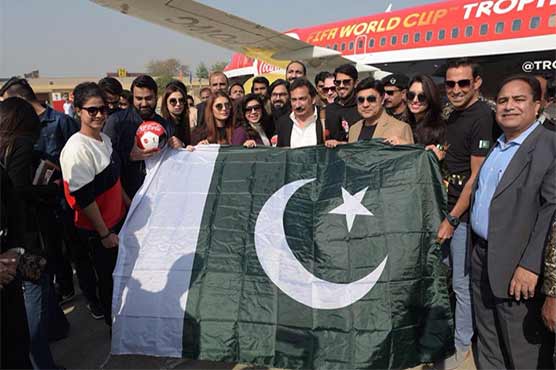 The 2022 FIFA World Cup has been hosted in the Gulf state of Qatar this year, where a series of thrilling and exciting matches will run from November 21 to December 18. According to FIFA rules, the right to hold the trophy belongs to either the Worldcup-winning player or the FIFA president or head of state.