Former legendary spinner Abdul Qadir has been officially inducted into the Pakistan Cricket Board Hall of Fame. National Cricket Team Head Coach Thaqleen Mushtaq presented the PCB Hall of Fame hat and plaque to Usman Qadir, son of the late Abdul Qadir. Abdul Qadir took 236 Test and 132 ODI wickets for Pakistan. The ceremony to present the plaque and hat to his son took place before the second ODI between Pakistan and Australia at Gaddafi Stadium in Lahore.

legendary Abdul Qadir was inducted into Hall of Fame!

At Gaddafi Stadium in 1987, Abdul Qadir destroyed England’s batting line-up and led nine players to the pavilion for 56 runs. His unbeaten 16 off 9 balls against the West Indies in the 1987 World Cup also helped Pakistan reach the semi-finals of the 1987 World Cup. Pakistan won the match by one wicket. On the occasion, Usman Qadir said that he is sure that his father will be very happy today and he will see with what respect his institution has given him this honor in front of the cricket fans at his favorite ground. He said that cricket was everything for Abdul Qadir. Usman Qadir thanked the PCB on behalf of his family for acknowledging the services of Pakistan and his father for the sport.

He said that he was a cricket genius who was always happy to share his knowledge and experience. He was well versed in his art and through it, he innovated cricket, after which many players followed him and spread this art to all forms of cricket. On the occasion, Thaqleen Mushtaq said that it was an honor for him to be inducted into the PCB Hall of Fame on a regular basis. Abdul Qadir is a hero for the race. 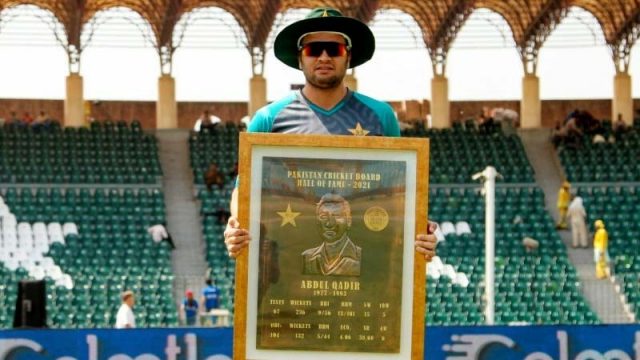 It should be noted that Abdul Qadir was born on September 15, 1955, in Lahore. He made his debut against England in 1977. In his second international match, he took 6 wickets for 44 runs, but on the basis of this performance, he was included in the Wisden Cricketers’ Almanac. Abdul Qadir passed away on September 6, 2019, in Lahore.