In the 15th match of Pakistan Super League (PSL), Quetta Gladiators defeated Lahore Qalandars by 7 wickets thanks to a brilliant century by opener Jason Roy. Quetta completed the target in the 20th over, Jason Roy scored 116 off 57 balls, his innings included 11 fours and 8 sixes.

In the match played at National Stadium Karachi, Quetta captain Sarfraz Ahmed won the toss and invited Lahore Qalandars to bat first. Lahore Qalandars scored 204 runs for the loss of 5 wickets in the stipulated 20 overs. Fakhr Zaman remained prominent by scoring 70 runs. Lahore Qalandars innings got off to a good start with a 61-run partnership between opener Abdullah Shafiq and Fakhruzzaman but Abdullah was dismissed for 32 off 27 balls. Lahore had to bear the second loss in the form of Kamran Ghulam, he returned to the pavilion with 19 runs off 13 balls, besides Muhammad Hafeez once again failed to score big and left the team with only 8 runs.

However, Fakhr Zaman continued to bat aggressively from the other end, but he too was dismissed for 70 off 45 balls, but in the closing overs, thanks to Harry Brooke’s aggressive innings, Lahore scored 204 runs in the allotted 20 overs. Harry Brook remained unbeaten on 41 off 17 balls while David Visa scored 22 off 9 balls. 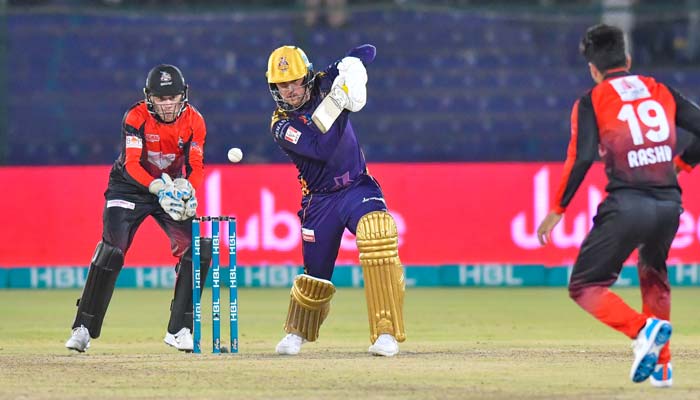 For Quetta, Ghulam Mudassar got two wickets while Iftikhar Ahmed and Cookwood got one wicket each. The Quetta Gladiators had a smoky start in pursuit of the target, with opener Jason Roy playing aggressively from the start of the innings and firing catchy shots all around the ground.

However, when the team’s score reached 71, opener Ehsan Ali was dismissed for 7, after which Jason Roy started charging the Qalandars bowlers and completed the century. However, after a 96-run partnership with James Owens, Roy was dismissed for a smoky 116 off 57 balls. In the final overs, thanks to the brilliant batting of James Vance, Quetta won, he played unbeaten innings of 49 off 38 balls.