In the second Test match between Pakistan and Sri Lanka, the host team SL has taken a lead of 323 runs and still has 5 wickets left. At the end of the third day of the Galle Test, Sri Lanka scored 176 runs and got 5 out. Angelo Mathews, who played the 100th test for Sri Lanka, was dismissed for 35 runs. Dinesh Chandimul scored 21 runs.

Kaushal Mendis scored 15 runs. Fernando was dismissed for 19 runs and Dick Vela for 15 runs. On behalf of Pakistan, Naseem Shah took 2 wickets while Yasir Shah, Muhammad Nawaz, and Agha Salman took one each. Earlier, on the third day of the second Test match, the visiting team was all out for 231 runs in the first innings. The host team got a lead of 147 runs. On the third day of the Galle Test, in the first session, Pakistan started an incomplete innings on 196 runs with 7 out.

There was a 32-run partnership between Yasir Shah and Hasan Ali. Hasan Ali was dismissed for 21 runs. Noman Ali was dismissed for zero. Yasir Shah scored 26 runs. Agha Salman played an innings of 62 runs. Muhammad Rizwan and Fawad Alam scored 24 and 24 runs. Babar Azam 16, Muhammad Nawaz 12 and Abdullah Shafiq were out for zero. On behalf of Sri Lanka, Ramesh Mendis dismissed 5 players. Prabhat Jayasuriya got 3 wickets. Fernando and Dhananjaya de Silva got one wicket each. Pakistan has a one-nil lead in the two-Test series. 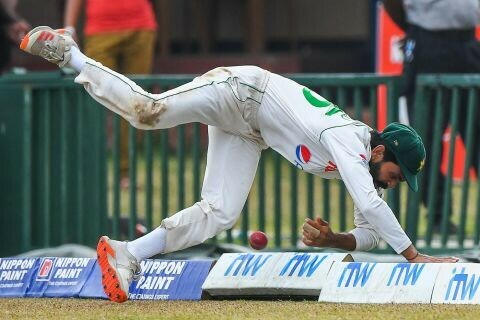