By Jaweria Avaan
September 28, 2022
Updated: September 29, 2022
Share
Facebook
Twitter
WhatsApp
Email
Share
Facebook
Twitter
WhatsApp
Email
Pakistan defeated England by 6 runs in another thrilling match, the bowlers defended the target of 146 runs. In the fifth T20 played at the Gaddafi Stadium in Lahore, Pakistan had given England a target of 146 runs to win. The English team scored 140 runs for the loss of 7 wickets in the allotted 20 overs, in the last over England needed 15 runs to win, Aamir Jamal hit one ball wide while Moin Ali hit a six on the third ball. England needed 8 runs off the last 3 balls, but Aamir Jamal bowled brilliantly and gave only one run. On behalf of England, Moeen Ali was the top scorer with an unbeaten 51 runs, David Mullan scored 36 runs. Phil Salt 3, Alex Hales 1, Ben Duckett 10, Harry Brooke 4, Sam Curran 17, Chris Woakes 10.

On behalf of Pakistan, Haris Rauf got two wickets, Muhammad Nawaz, Muhammad Wasim, Shadab Khan, Iftikhar Ahmed and Aamir Jamal got one wicket each. The Green Shirts got a 2-3 lead in the 7-match series against England. The sixth T20I will be played on September 30, while the last one will be played on October 2 in Lahore. Mohammad Rizwan and Babar Azam opened Pakistan’s innings. Captain Babar Azam lost his wicket on a total score of 17 runs, he scored 9 runs. Pakistan’s second wicket fell in the form of Shan Masood for 42 runs, he returned to the pavilion after scoring 7 runs. Hyder Ali was out on 51 runs, he scored only 4 runs. Iftikhar Ahmed on a total of 81 runs and Asif Ali on 88 runs.
Mohammad Nawaz was run out without opening his account, Shadab’s intentions were dangerous, after hitting a six on the first ball, he was also run out due to haste in the second ball. Meanwhile, Mohammad Rizwan completed another half-century. Pakistan suffered their eighth loss in the form of Aamir Jamal on runs. Muhammad Rizwan’s resistance to a total of 131 runs was also answered. He got out after scoring 63 runs in 46 balls. The entire Pakistan team returned to the pavilion on 145 runs. In the 5th T20 match, English captain Moeen Ali won the toss and decided to field. In the fifth T20, Mohammad Hasnain was rested and Aamir Jamal was included in the team, who made his T20 debut. 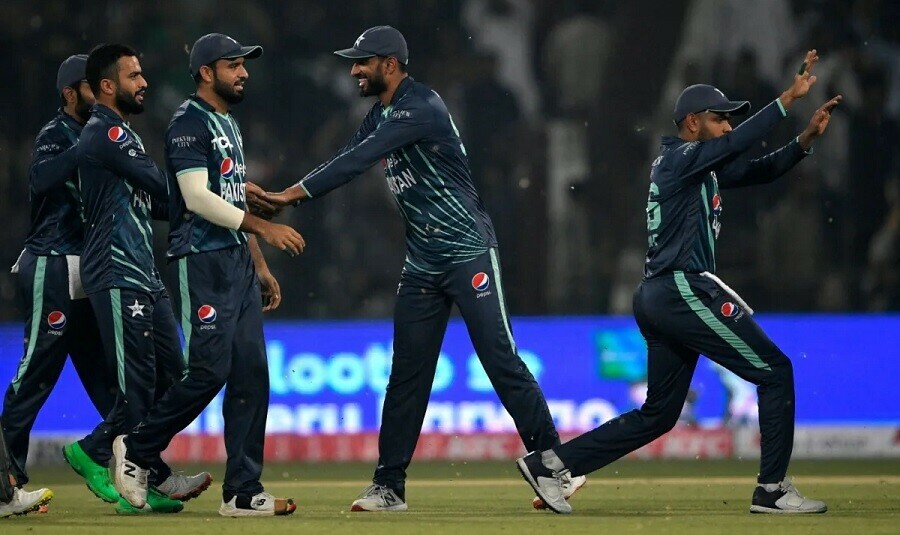