South African fast bowler Dale Steyn has congratulated Muhammad Hafeez, who has retired from international cricket, on his illustrious career. On social networking site Twitter, South African player Dale Steyn said that he had an outstanding cricket career with Mohammad Hafeez. He had an excellent time for his team and the country.

Hafeez faced Dale Steyn 28 times during his cricket career, but surprisingly, Stein was targeted 15 times and led the way to the pavilion. The former cricketer announced yesterday that he would continue to play franchise cricket and represent Lahore Qalandars in the seventh edition of PSL. Hafeez has played 55 Tests, 115 ODIs, and 119 T20 Internationals for Pakistan during his 18-year cricket career. 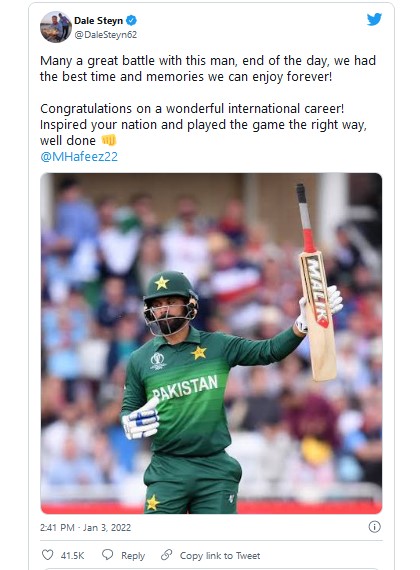